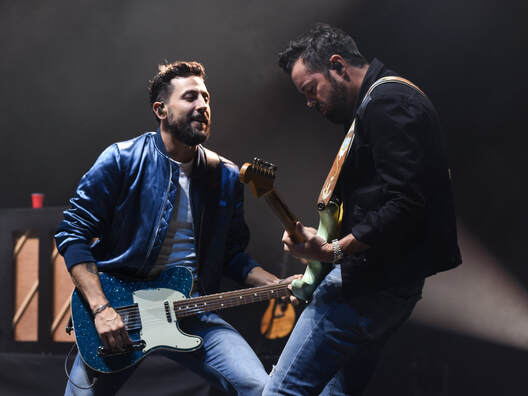 The rise of country music in the UK can be seen through the rise of Old Dominion in this country. In the space of four visits, the five-piece band have built a following that saw them performing in front of double digit numbers to a packed house at London’s Eventim Apollo in front of close to 5,000 as part of a 5 date tour.

For this round of dates, OD invited Jordan Davis along for the ride to play his first shows in the UK. During his set we discovered though that he will b returning in just a few months as he confirmed he would be playing as part of the 2020 Country2Country line-up. Since the release of his debut album, Home State, in 2018, UK country fans have been asking when he would be coming over and he arrived with a bang in London. As ever, plenty of people had made their way into the Apollo early to catch his set and sung along to every word. Jordan was made to feel at home right away and I’m sure many will be counting till his return in March.

As the clock struck nine, it was time for Old Dominion to take to the stage for their biggest ever show in Europe and they weren’t going to disappoint. With the release of their third album just a few weeks away, OD would treat the crowd to fan favourites from the Meat and Candy and Happy Endings albums as well as offering several new songs too. From the moment OD took to the stage to play Snapback, the energy on stage was electric and they were soaking in and enjoying every moment with the crowd singing everything back to them. Over the past few month, OD have been releasing tracks and as ever it was apparent the UK fans were counting down to the albums release as they already knew the words to these new tracks – something that still gets the same surprised looks from the artists on the stage. The highlight of the night though came half-way through the evening as the bands three songwriters, Matthew Ramsey, Brad Tursi and Trevor Rosen, took centre stage to introduce the bands unlikely story and their love of song-writing. The Apollo crowd didn’t realise it, but they were about to witness one of the ultimate song-writers round this country has ever witnessed. The trio would sing snippets of the songs that made them who they are today, that had been recorded by some of Nashville’s biggest names and taken them to the top of the charts – not to mention the songs that got them a record deal!

As the evening continued, the crowd kept singing and OD would play all the way to the venues curfew time. They made sure they played all the crowd favourite tracks and would leave the London fans wanting more. You got the feeling they would have played all night if they could. Having shown what an impact Nashville artists can make on the UK country music scene, the main question to ask is what will be next for OD on these shores?