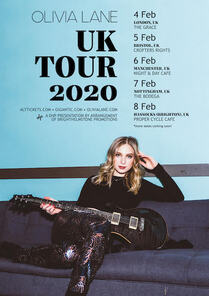 Following the release of her latest EP ‘The One’ this summer and a much-anticipated national US TV debut on NBC’s Songland, Nashville-based singer/songwriter Olivia Lane has announced her return to the UK in February for a run of five headline tour dates, with additional shows to be announced in the next few weeks.
With her previous singles ‘Hey 3AM’, ‘You Got Me’ and ‘So Good It Hurts’ gaining radio play on both sides of the pond including from BBC Radio 2 (Bob Harris) and BBC Radio Scotland (Ricky Ross), the announcement ties in with the release of a brand new piano version of EP favourite ‘The Cape’ (listen here / original video here).
​
Looking forward to the tour, Olivia said: “There aren’t enough words to express my excitement about coming back to play in the UK! I love the people and the culture.”