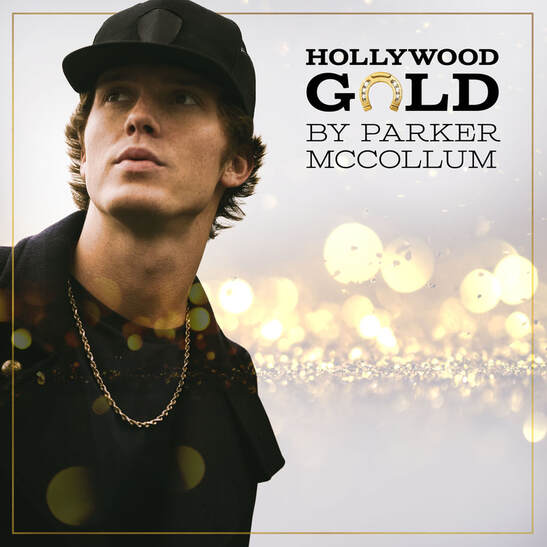 You often find a term along the lines of “next big thing” can be banded around quite freely but Parker McCollum is someone that although I hadn’t been overly familiar with musically, was a name that was giving real excitement to a lot of well-respected artists, creatives and critics alike. High praise from the likes of CMT, Rolling Stone and Sirius XM does not come easily, and he has now released his first major label EP Hollywood Gold to back this up.

McCollum who was born in Conroe, around 40 miles north of Houston in Texas has been a success story of the independent music scene in Texas since graduating high school and moving to Austin for college. His debut EP came in 2013 before the local spotlight began to shine after the release of “The Limestone Kid” two years later then as his profile began to rise in Texas, the national eyes began glaring with sharing the follow-up “Probably Wrong” in 2017. Then in June last year he made the transition to bring his music to Nashville after signing with MCA Nashville/UMG Nashville where “Hollywood Gold” is the first offering.

Texas country is a unique world of its own, almost a sub-genre in itself. Without fully appreciating what it is, people may have expectations exclusively along the lines of Asleep At The Wheel or thinking of how Alabama put it that “If you're gonna play in Texas, You gotta have a fiddle in the band” which is not always what you will encounter. The sound is a lot more traditional that what we are hearing to come out of music city right now and is different but a friend of mine that studied in Fort Worth described it as having that grit that Music City doesn’t generate and how the recordings are a lot more raw as there is much less emphasis on the production. Fundamentally the music is just honest and the sound is pure.
​
Texas has a long history of artists that have gone on to be some of the biggest names in the genre and be commercially successful in the mainstream, almost like a who is who in a country music history book: Ronnie Dunn, Waylon Jennings, George Jones, Kris Kristofferson, Miranda Lambert, Jim Reeves, Kenny Rogers, George Strait and Townes Van Zandt to name just a few. Then the state has also key significance in the growth and progression of so many more including The Chicks where the group originated and 2 of the 3 members were born and more recently the emergence of some of the most exciting talents in the genre who we are very familiar with on this side of the Atlantic that are taking country music to dynamic new places like Abby Anderson, Mickey Guyton, Danielle Bradbery, Maren Morris, Kacey Musgraves, Eric Paslay or RaeLynn. Despite this, some people have a sense of being wary of artists that have had success in the region going off to the bright lights of Nashville and the potential changes that this may bring sonically.
​
However, Parker McCollum could be the one who (using a nice little Star Wars reference) could well and truly to bring balance to the force between the two sides of the genre. He has over two and a quarter million monthly listeners on Spotify alone, with just under 28 million streams for his new EP’s lead single “Pretty Heart” that was a regional number one in Texas in addition to hitting the top ten on both the Country Airplay and Hot Country Songs on the Billboard charts. With this new EP which he co-wrote 5 of the 6 songs (the other has a writing credit for a certain Chris Stapleton) the 28-year-old has created something pure, real and honest that will have appeal across a broad spectrum because in the nicest possible way is inoffensive to the ears of any listener.
The fact that there is so much happening across the sextet of tracks doesn’t detract away from them fitting together cohesively and really feels like a body of work rather than individual tracks. The bluesy pop rock sounds of the opener “Young Man’s Blues” create a real toe tapper which rolls in to “Like A Cowboy” which you know has Chris Stapleton’s imprint all over it and as a ballad allows McCullum to show how smooth his voice is.

With the really smooth and commercial Americana feel of exciting guitar riffs it is evident to why “Pretty Heart” is the perfect introduction to people new to his music and has had the success and recognition that it deserves. Then Parker’s only solo write on the EP “Hallie Ray Light” just screams out to be a mega hit on the radio with the mid-tempo and heavy impact of the slide guitar. “Hold Me Back” is the real gritty pure Americana sounding track and the EP concludes coming back a bit on the softer rock side with “Love You Like That”.

The EP is named after a prize-winning racehorse that belonged to his grandfather and whilst I am not going to say this is an EP that will change your life after listening to it, there is a fantastic introduction to an incredibly talented songwriter and multi-instrumentalist that will intrigue you to want to hear more. For traditionalists they may feel there is a change compared to his previous releases whilst others may have expected more of an uplift in the elements involved but ultimately you see why this is an artist that a lot of people are very excited about with the potential to be the modern link between the Texas sound and the Nashville image.
​
Tracklisting: