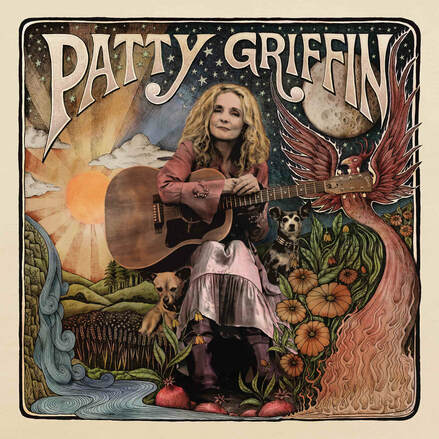 23 years ago, Patty Griffin made her first musical debut with Living with Ghosts. Unlike the dolled up, rosy painted, drum machined led sounds that seemed to dominate the world at that time (yet still does today), Griffin instead walked into the scene with nothing but a guitar and a luminous voice that sang of tales about precious memories and cosmic feelings, building up a minimalistic portrait that tied mankind into one.

As March slowly paves in, Patty Griffin is set to release self-titled 10th studio album “Patty Griffin” (Friday, March 8 on PGM Recordings label via Thirty Tigers), her first release since “Servant of Love” in 2015. Recorded at her home in Austin, TX with longtime producer Greg Ross and help from friends and “accompanists” including guitarist David Pulkingham, drummer/percussionist Conrad Choucroun, cellist Lindsey Verrill, pianist Stephen Barber, and Robert Plant who appears in both ‘What Now” and “Coins” as backing vocals.

With already 3 singles released, including “River” exclusively premiered via People Magazine followed by “Where I Come From” and “Hourglass”  Patty Griffin introduces the second sequel to previous inimitable recordings, including a follow-up to 2011 release “American Kid” while paying a special homage to “Living with Ghosts.”

Griffin, delivers potent, self-reflective recordings, painting visual little movies inside listeners heads. Ultimately, revisiting the past for “Mama’s Worried” finds Griffin reflecting upon her younger days. Coming from a veteran family, the singer-songwriter, sings about the constant worry and hurt her mother faced while her father was away, despite it all as the songs goes “She starts singing in the morning, she works and sings all day, singing sad, singing low, for while the worry goes away.” On the subject of reminiscing about the past, “Had A Good Reason” opens up about relationship with her mother. Meanwhile, “What Now” questions mortality as “Luminous Places” declares defeat towards the inevitable. In an interview with Entertainment Weekly, Griffin opens up about her recent cancer scare that led to the song Luminous Places, “I began helping another musician in town diagnosed with Stage 4, this amazing bass player. A week later, I was diagnosed. He found out about it, and here is my friend who then helps me out, getting through cancer.” continuing “You have this life in this body, and it’s really fragile. But what you have inside is what you have to offer, and it’s just as important as anyone else’s. I’ve had a chance to travel and be in so many places and understand how much there is in common and how much beauty there is.”

Observing the surroundings, Griffin storytelling often mirrors her most yet personal stories in songs, however, can evidently express "the strikingly intimate” yet not make it about herself.  “Bluebeard” finds Griffin taking a bluesy approach, in a story about unfaithful love that appears to continue to “Coins” about a hungry, money hunting partner. Voicing her views on current world state “The Wheel”  while “Boys From Tralee” speaks of a story about Irish immigrants fleeing across the Atlantic in search of jobs. “What I Remember” an introspective sight about a past relationship as the album concludes with personal “Just The Same”

As No Depression editor, Kim Ruehl once wrote “ These Days I don’t mourn my songwriting career anymore, because I know Patty Griffin is writing. She writes the songs I wish I could write, so I figure the world is covered in that regard.”