This week (4th December), Welsh pop-country artist Rae Sam released her second single - Keep Running - just a few weeks after her debut track - The Great Escape - was released. In these early weeks, Rae has already seen her music played on the radio and is set to release a debut EP early next year. We caught up with Rae to find out a bit more about her for our latest Quick Fire Five interview.

​1. How does it feel to be releasing your second single?
I am very excited to be releasing my second single. 'Keep Running' is such a feel good song and one of my favourites from the album, so I am looking forward to sharing it with everyone. This song also has a music video, which was a lot of fun to film!

2. What kind of reaction have you had to your debut track The Great Escape?
My debut track 'The Great Escape' has had a great reaction! When I wrote the song, it's meaning was unintended for days like these. But when the song was released, it felt like perfect timing to get people dancing and joyful again. A lot of people have said that they can't stop singing it! It has had a lot of radio play too, which is an amazing feeling for a songwriter!

3. What was it like hearing your music on the radio for the first time?
When I heard the song being played on the radio, it was the most incredible feeling. I didn't expect that for my debut single, so to hear it and hear the wonderful things that the presenters were saying was exciting and emotional - My husband took a video of me and I just look so overjoyed!
4. How has it been recording new music during the current situations?
When I started the process of recording, it was before the pandemic hit. I was in the studio, fulfilling a heart's desire and then suddenly I was trapped in the house waiting for news about when I could get back! It was an emotional rollercoaster. Luckily we were in the next stage of the process where the musicians were working remotely from Nashville etc, and I met with the co-writers over zoom! I just worked and worked on what I could, and interestingly, the time allowed me to get creative with some of the songs and it certainly paid off!

5. What artists have you looked to for inspiration?
My music is a combination of everything that I love and is certainly influenced by who I listen to. There are key artists who have sculpted my music throughout the years: Carrie Underwood, John Mayer, Kelly Clarkson, Natasha Bedingfield, Needtobreathe, Ed Sheeran and most recently Maren Morris.

Rae's second single is out now. You can hear it via the links below :​ 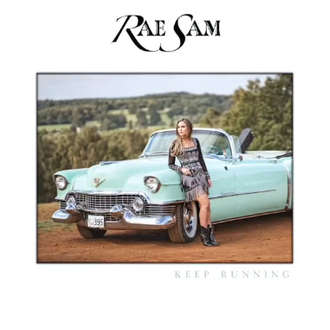