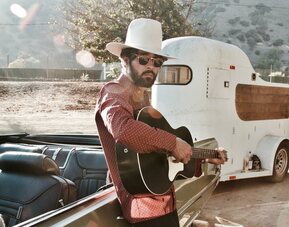 Singer-songwriter Ryan Bingham is set to release his sixth studio album ‘American Love Song’ (out Feb 15) via Axter-Bingham records.
​
Recorded at the famed Aryln studio in Texas, produced by Bingham and musician Charlie Sexton. The 15 track record finds Bingham revisiting the past, living the present and anticipating the future while giving his audience a personal glimpse of his life from dark tunnels, overcoming guilt to learning how to love again.
‘Jingle and Go’ opens up the album with a rocking cultural experience down Highway 69 at Pinky’s Roadhouse. ‘Nothin’ Holds Me Down’ sets the record straight, Bingham cannot be traced down under one genre instead genre-defiant led by his soul searching journey into his musical aspiration that can be heard in each track.

Leading with an acoustic start that turned into a rambunctious tell-all tale ‘Potanic’ of two strangers meeting up and heading down to West Texas just to beat the fuss, ‘Lover Girl’ where the story later continues in ‘Time For My Mind’
‘Got Damn Blue’ an autobiographical tune that meets Son House and Howlin Wolf midway as ‘What I Could’ve Become’ looks at the past and seeks questions about what could’ve been out in the country, similarly leading about the passage of time ‘Wolves’ revisits a painful time in Bingham’s youth as he sits and narrates his story.

Meanwhile, ‘America’ a bittersweet tune serenading the album whilst questioning the spirit of the country and where it had gone in the light of ongoing political shenanigans from gun control, rallies and social media integrity in a 3-minute track.