The Sit Down with Scotty McCreery

It has been ten years since a seventeen-year-old from Garner in North Carolina stepped up to audition in front of Steven Tyler, Jennifer Lopez and Randy Jackson on American Idol. Since winning season 10 of the Fox talent search, Scotty McCreery has seen all four of his studio albums debut at number one of the Billboard Album Charts and been honoured with numerous awards including from the ACM and CMT. Coinciding with marking a decade as a charismatic entertainer with an unforgettable voice, McCreery is set to release his fifth studio album “Same Truck”.
​
The announcement of the release of “Same Truck” was brought forward due to intense fan demand following him releasing “Why You Gotta Be Like That” and the news of his fifth studio album being released through Thirty Tigers was shared last month as an early thank you to his fans. Ahead of the release of the album on September 17th, which McCreery co-wrote ten of the twelve songs, Jamie caught up with Scotty over Zoom to hear all about it along with what he has been up to since his visit to the UK in October 2019.
“I really haven’t had this time since I was fifteen or sixteen years old to just sit back and do not a whole lot. The good thing for me was that whilst we weren’t on the road, I had the studio upstairs and I was in there more than ever. I played more guitar in the last year since I was probably thirteen or fourteen years old so in that aspect for me it was a good thing but it was strange to not be on the road every weekend for sure. It was awful circumstances but if I’m really being honest, that time at home with my wife, we got Moose and we were spending time as a family for more than forty-eight hours, we got to spend months together which we have never had and honestly didn’t think we would ever get until I was old and retired so in that aspect it was very nice.” 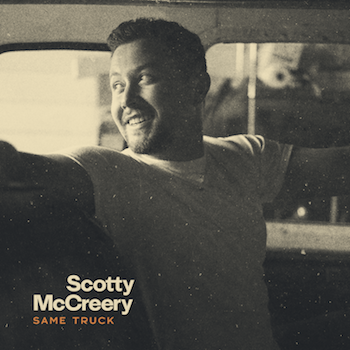 The fifth studio album “Same Truck” comes three years after its predecessor “Seasons Change” which came after quite a substantial gap following his third album. When I first met Scotty two years ago he had talked about having the time to reflect on who he was and what he wanted to say as an artist prior to the release of “Seasons Change” so I explored what has varied since then and if the perspective as an artist has evolved further.
“For me, the album is still very much me, it’s very personal and I think most of my albums have been that way especially recently. I think it’s just in a different mindset with having the time to reflect on things and realise what is important to you. Most of my albums before have been looking ahead, excited about the future and what’s going to happen but we didn’t stray from the formula too much. Before “Seasons Change” I had five years to do that which wasn’t really by choice, with label stuff and everything but I had that time there to go in and write a ton of songs. I lived a lot of life through there too and had a lot of big life things happen. Losing my grandfather and inspiring “Five More Minutes” then getting engaged to Gabi, looking ahead towards marriage and thinking about that so I had that time then for where I was at in life. Now that record for me seemed very much like my debut album just in the sense of having a grasp of what I wanted to say and how I wanted to say it so in my mind we took that and ran with it for “Same Truck”. I wrote again from the heart and what I’m feeling, you have songs like “Same Truck” and “How Ya Doin’ Up There” which come from that so I just write what I know and what I live which is what I feel we have got with “Seasons Change” and “Same Truck” too.
As the state of the world restricted all of our lives during the last eighteen months and there is now a new album on the way, I asked Scotty when had work for this record began and how much of it was created during the shutdown?
“It was a continuous work since the last record and we had pretty much an album close to done prior to the shutdown and everything. Then like we said, I had the time to sit down and write more songs, it’s not that I fell out of love with a lot of the songs that were going to be on that record but that I fell more in love with what we were writing in the last year or so. I kind of scrapped almost a full album before what you hear on “Same Truck” which was never done before but it was interesting trying to narrow down all the songs to what we’ve got. I think there is definitely an aspect of the recency bias on some of the songs but if I’m being honest, I think a lot of things in life are cyclical and writing songs I think are that same way. I didn’t think I was writing my best stuff leading up to the pandemic, I think I had set a bar for myself for songs like “Five More Minutes” and “This Is It” where in the back of my mind I kept thinking I don’t think I’ve got those songs on this record. That time for me personally really helped me sit back and refocus which was big for me. I think we only actually had fifty percent of the songs on the record that was shelved as co-writes.”

Looking through the track listing for this record, you see McCreery’s name as a co-writer on ten of the twelve songs which as he had said is more than the previously shelved project he had created before the pandemic. The other thing you notice is some different names that had not been involved in his previous releases amongst the writing credits which he felt he benefitted from in having some different perspectives on his ideas.
“I think that’s been huge. I’m still a young songwriter and I’m still learning a lot so the more people I can work with, the better. I try to do that, I love writing with new people and getting their fresh take on something. Getting to write with Rhett Akins and Lee Thomas Miller who are guys I hadn’t written with before, it was exciting to get in a room with them and honestly, just to say it but sometimes you don’t get those calls before you have some success at radio so it was nice to get more calls to write this time around.”
​
After ten years and four number one albums, I asked Scotty what was the overriding message that he wanted people to take from his fifth studio album “Same Truck” and its release in 2021?
“As I talk with friends and I talk with people out there, everything over the last year when you would turn on the news there has been so much of this divisiveness. I’ve got friends on both sides of the spectrum and you think why can’t we all just get along here? We’re all on the same team and if we spent as much time and effort building each other up as we do tearing each other down, the world would be an amazing place. That’s where the message behind “Same Truck” came from, I think a few of this songs are for anybody no matter where they are in their life can relate to so I just hope they see it’s a project that says hey guys, we’re on the same team. Then there’s obviously the songs that are personal to me but after the last record  and seeing songs that were very personal to me then hearing people say man, that’s what I’m going through right now so because of that I think I’ll keep things pretty personal on my records.”

Then finally after the resounding success of his first trip to the UK in 2019, we talked about how important is for him to return across the pond when things allow it and for him to build on this fanbase?
“That is at the top of my priority list! We just had a call about that yesterday with management so we’re still trying to figure out the best way to get back over there. Last time we were over we had song requests that we hadn’t played in eight years with people asking for things like “That Old King James” and we absolutely loved it, everybody was so kind and just pumped up to be there which made us even more so. We were already at a ten and it took us to an eleven so we want to get there but we want to make sure everybody is safe and we can do the biggest, best shows we can do so hopefully things will be back on track and we can get over there sooner rather than later.”
​
Same Truck Tracklist

​Triple Tigers recording artist Scotty McCreery will release his highly anticipated fifth studio album, Same Truck, on September 17th 2021. The album, produced by Frank Rogers, Derek Wells and Aaron Eshuis, is available now for pre-order HERE. You can keep up to date with Scotty through his Website and follow him socially on Twitter Facebook & Instagram.