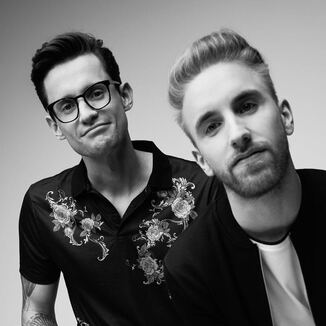 Coming from Australia, you are one of the few artists who have made the move to Nashville.
It’s a very small proportion that do it, but I think it’s happening more and more now. Keith Urban was kind of the hometown hero that started that, he’s our biggest influence because he made that trip and inspired us to think that maybe we can do that as well. There’s Morgan Evans as well that’s done it and hopefully us. There’s a bunch of other Australians making the move now.

What was your knowledge of the C2C festival?
I’d heard of C2C but I didn’t know that country music was a thing at all over here in Europe. I heard how bands would go back every year and tour and they would be selling out arenas. Everyone would always speak about it being a specific type of crowd over here. It’s different but they rave about it and I always thought that hopefully we get to go and do that one year and I’d love to invest in it and play shows over here. We got the call to say we’d be playing and we were over the moon with it.

What was your immediate reaction to that call?
I probably swore and said thing I won’t repeat now. It was awesome and has always been a goal of ours to play in new areas and build fans across the world. We want to be able to play shows all over the world, this was our first ticket to Europe and start putting in the ground work to build fans over here.

What was your families reactions when you said you were moving to Nashville?
It was excitement followed by tears. My whole family knew we wanted to move here and that was the goal so they understood we had to do that. Obviously my mum was devastated at the same time as I am kind of a mums boy and I love my mum and she really misses me. I remember when I gave her the call when we got a record deal to sign with Sony. There was cheers and then the reaction of that means you’re actually going now. I think it hit her at the same time, the family definitely misses us a lot.

It’s paid off.
One day, it’s paying off so far. We’re in Berlin!

Have you had much of a chance to explore?
I want to. We’ve been inside the venue and then popped out to the hotel and back every day. I’d love to see the sights, it looks beautiful. I have been learning some German, but I’m trying to say everything in the most Australian way possible! Reading street signs outside, I would add a twang to it. I know good morning and a few swear words, I needed to be able to cuss in German. I was saying a few last night and was getting a few looks from people thinking what is this guy doing! I would though like to learn German and may have to take some lessons to get a few basics down as it’s tough.

The crowd are seeing a lot of bands for the first time here, what have you notices about the audience?
We just finished a set about thirty minutes ago and it was one of the longest claps we’ve ever had. They just held on a little longer and everyone was sitting down ready to digest the music. There was not talking, just waiting to hear the music we’ve created and that’s awesome. After the show, everyone came up saying how much the loved the songs and it’s a really cool community. It’s exciting that that exists in Europe and is around. I hope the reception in London is the same.

What have you been told to expect from the London crowd?
I’m pumped, they throw eggs at you as they’ll be expecting Americans and they’ll say we’ve got enough of you living here already! No, it’s similar thing to Berlin and we’re hoping for a similar style crowd. I actually went to London when I was 16 on a soccer tour and haven’t ben since then, certainly not in this capacity. Everyone has raved about the whole experience.

You released a song at the end of last year.
Yeah, we did the EP and then two reimagined versions. We have a single out with Mitchel Tenpenny right now that was our most recent collaboration. We got some mixes back of some new music we’ve been working on last week and we’re jumping for joy and are very excited to get it out. That’s the next thing for us, to get some new music out when we get back. We’re ready for it.

Now you’ve arrived in Europe, have you got the itch to come back?
Absolutely. I want to invest in this as to play shows here is a dream.
​
How has your reception been back home in Australia since making the move to Nashville?
I feel everything has kind of stayed the same at home, not a whole lots changed. It’s funny trying to explain what’s going on in Nashville to my parents and friends that don’t know about the music industry. The image of Nashville in their head is a kind of farm town with everyone wearing straw hats. I’ve had to explain that no it’s a really cool, thriving city that’s growing. Everybody’s been really supportive and are so happy for us.