The Sit Down with Rod + Rose

When you achieve the feat of over A BILLION career on-demand stream, you are clearly one of the most recognisable names and voices in country music. When you enhance this with 6 number 1 songs along with multiple ACM and CMA nominations it is no surprise how Rodney Atkins epitomises the core, working man perspective of the genre.
Then if you blend this with the poetic brilliance of his wife; Rose Falcon who started out as a teenage rock and roll protégé originally from New York that has since had songs cut by artists such as Faith Hill, Lady A and Eric Paslay, the musical connection and result is bound to create an enticing result.
After marrying in 2013, the pair have now joined creative forces in an official capacity for the first time to deliver their self-titled debut EP as Rod + Rose which is out now (available HERE) through Curb Records and brings the merging of lean writing and pure poetry, straight up country intertwined with a little bit of roots.
​
As a couple that have been married for some time and have both forged successful careers as solo artists and songwriters, was coming together to record as a duo something that you guys had always talked about and wanted to do?
“We had talked about doing some music together. We did some duets on the Caught Up in the Country album and when the pandemic happened, we recorded a live video for an event called Unite. After that went up onto Facebook, Mike Curb who owns my record label called me up and said I think you and Rose should consider doing a project together, not you singing a song with your wife as a duet but you guys as a new artist. We needed that, someone to tell us that they wanted it.” - Rodney
“We had always thought about doing it but not like a Highwomen or Pistol Annies type side. We had talked about it a couple of times but to have Mike Curb actually ask for it and have it gone viral on Facebook in the way that it did, knowing that people wanted to hear it was really important to us.” 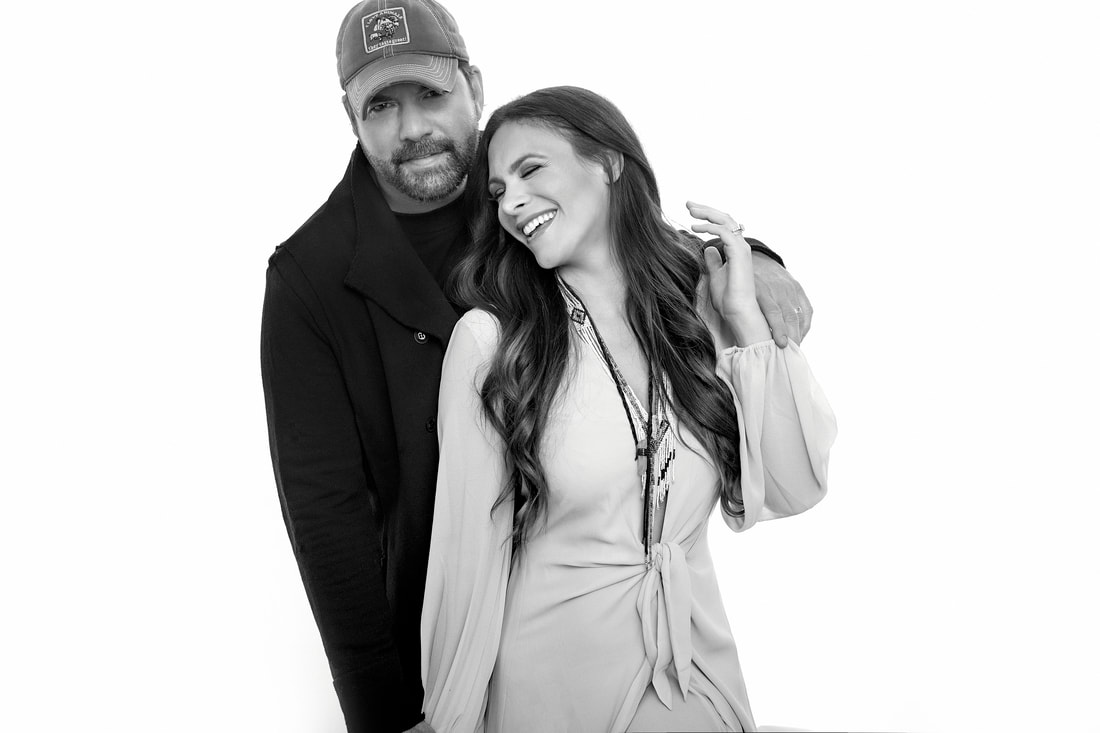 By the sound of things then, this came about as a result of the pandemic presenting these opportunities that would not have arisen without it.
“For sure. Part of it wasn’t that we were together so much more because we always spent a lot of time together. I would go on the road with Rod, and he records his records at home so it was the events that we were asked to do like the Unite performance was exactly what led to it so yes, without the pandemic we would never, well I don’t know if never but that’s why it happened pretty much”
“We are both people that have to make music or we get weird, it’s our therapy, it’s what we do, and we love it. I do think the pandemic was the perfect storm for us to just be together and not going in different directions, so I think it had a whole lot to do with actually getting it done.”
How different did the creative process feel in writing the four songs for this project compared to when you have been writing for your own projects or songs that would find it’s way to other people?
“When I write a song, I strive for it to be something that I would want to record myself but that being said it definitely was a different process because when I participate in writes say for one of Rodney’s records he overthinks, and we’ll do something like five writing appointments on the same song. For me, I’m what Rodney would call a blue-collar songwriter where in the past I was writing four or five days a week, but I would expect to have a song finished in one appointment. I had to learn through writing with Rodney that just because it’s not fast, it doesn’t mean that it’s not good and that applies to all things in life. I’m that person that when things start getting a little hard sometimes thinks that maybe it’s not meant to be, but Rodney is not! That’s where we work well together and in writing the Rod + Rose project, it was different to my process and different to his. It was a lot easier than me writing alone for my project or him writing alone for his, I think.”
“It was and just having the pressure off being all on my shoulders was super nice. For us to be able to create space for each other was very easy and very enjoyable for every song that we wrote.”
​
The other track on the EP is a version of Put Me Back Together, which was originally recorded by Cheat Codes and featured the vocals of Kiiara. Rodney and Rose’s version is very different sounding version to this and manages to make what was an EDM track sound like a classic country song, so how exactly did you both decide that this was a fit for the project and would be a great song to rework?
“Rose brought me the song for me to cut as a solo a long time ago and I sent it in to the people that I work with and bounce songs off of but never got a response, but I really loved the song. When we started doing the Rod + Rose stuff, she brought it back up and said I really love this song and as we’re writing songs about falling together instead of falling apart and being vulnerable with each other, this fits the profile. It was all her bringing it in.”
“Whenever I had listened to it, I had always heard in my mind Rodney singing that first line; “I never met nobody” but I don’t think it’s worth covering a song unless it’s going to be something totally different. Rodney killed it! That line is exactly how I dreamt it being and (looks to Rod) I’ve actually never told you that before until this moment. It was so cool to hear it come to life and see that each line had lined up, we did have to change the F bombs because you know, when you’re working on music in the house all the time around two little kids.”
“Truthfully, when I first heard it, I couldn’t imagine me singing it after hearing the Cheat Codes version but together it was so easy to sing. It’s enjoyable to sing that song and I love dancing to that song.”
Looking outside of Rod + Rose, it has been quite a long time for Rose since she last released music of her own. Did the process of getting back in the studio and recording once again excite you and entice you to think about releasing some more solo material?
“It’s exciting me for sure but, I don’t know if it, I’m not sure. I may just throw some music out there but we’re going to do more Rod + Rose, he’s busy working on a Rodney Atkins record and this wasn’t just a one-off EP for Rod + Rose, we’re going to keep doing more. I’m a mom, I’ve got little kids, I’m a songwriter and I may put out some music, but my commitment right now is to keep working on this Rod + Rose stuff, keep writing songs and taking care of my babies.”

Then for you Rodney, how are you finding things working on two projects at once? Are you finding it is impacting what you are looking to do with new solo material?
“It’s pretty dope. I’m digging it. I’ve never sung these kinds of songs really that we’re doing for Rod + Rose but I’ve enjoyed doing that. What it’s doing for my solo stuff is pushing me to edgier and grittier things to pursue with that. It’s really liberating that you can cover a whole lot of stuff and I love both sides of it, I’ve had the comment several times after people have heard Rod + Rose and said I didn’t know you can do that or go with that. I’m enjoying it a whole lot and thrilled that now we get to tour. We’ve got a string of dates coming up in April, playing City Winery in an intimate setting and we’re talking about getting over to see you guys in the UK which was actually one of the first things that we talked about when this music started coming together.”

Rod mentioned that coming over to see us was something that you guys have already been talking about. What is it that you have heard about our little island that is really drawing you both to want to come over?
“It’s interesting, my dad is a songwriter and he always had a pretty big following over there and did a lot of touring so the vibe that I got was that people really love songs and you listen. It just feels like a great audience that is really appreciative which of course we love that idea. Eric Paslay who I write with and is one of our good friends, has been over quite a bit and says the same. We also, love new places, cultures, getting out with the kids and the food. We like adventures together and I know it sounds cheesy or whatever, but we genuinely love seeing new things and having fun. I feel like coming over will be something that is on the cards and when things get a little bit more normal, I think we’ll be coming! We genuinely want to come over and see you guys because we love to travel, and I’ve never been to London. We have been to Germany and Paris when Rod did some USO stuff, but we did not make it to London and I really want to come.” - Rose

Lastly, I told the story of how Rodney was one of the first people I ever saw on stage in Nashville, back in 2018 just before CMA Fest for the Music City Gives Back event which effectively kicks off CMA week. Obviously, the pandemic and the absence of the festival has prevented it from happening for the last two years, but I asked whether it was definitely on the cards to be happening again in future?
“It kind of hinges on CMA Fest, which is still a bit up in the air, but it will definitely be back. I love the cause for the W.O. Smith School so we can’t wait to do it. It’s knowing that it’s coming around every year, a lot of times I’ll play that then I’m back out on the road but it’s really cool that you got come out and see what we’re doing!”

Rod + Rose Track listing:
1.  Being Here, Being There
2.  Fine By Me
3.  Put Me Back Together
4.  Anyway
5.  Figure You Out (Wedding Version)
​
Rodney Atkins and Rose Falcon’s self-titled debut EP as Rod + Rose is available now through Curb Records which you can find HERE and you can follow them on TWITTER (along with their individual accounts: Rodney / Rose) FACEBOOK (Rodney / Rose) & INSTAGRAM (Rodney / Rose)