​The Sit Down with Sykamore

​We initially became aware of the delight from Carseland, Alberta that is Sykamore when she was named by CMT as part of their Next Women of Country class for 2020 and our first meeting was is April last year when she caught up with Jamie which you can read HERE.
At that point she was teasing news of her debut studio album which came out on August 12th and the Michael Knox produced project titled “Pinto” (available to download/stream HERE) was well worth waiting for and justified what Rhett Akins saw in her as an artist when he first discovered her. Sykamore also shared that whilst she had previously been to both Ireland and Scotland, the extent of England that she had seen was limited to Heathrow airport, but she was very keen to change that, and that plan is now coming to fruition with her first UK shows taking place this month.
Ahead of her trip across the pond to play shows alongside Jeff Cohen in both Liverpool and London, she took some time over Zoom from her hotel room in Swift Current, Saskatchewan whilst she was on radio tour in Canada to catch up with Jamie to give us all the plans for the upcoming visit.
“It’s gonna be awesome. It’s coming up so quickly, we made the plans and part of me thought it was never going to happen, but we are leaving at the weekend which is crazy. Honestly, I want this to be the first of maybe a couple of trips over this year so there is these two and I’m also doing some songwriting then maybe going to some of the Americana events so that’s going to be really great for us because what we would really love to do is start building relationships in the UK and that would be a great place to start. There is only the two shows but we are really hoping to be able to make enough connections that we can maybe come back in the early spring or summer so we are hoping there will be more shows on the horizon if not immediately but definitely eventually.”

In our first interview, before the release of “Pinto” it was implied that the record was ready and pretty much had been for a while but due to the pandemic, there was more thought into managing the timing of the release. As the record came out in August and had been written some time before this, I wondered if it may be time to start hearing something brand new and whether we may be super lucky on her upcoming trip.
“That is definitely possible. I guess a lot of artists can say that the pandemic set them back an album cycle because no one was touring so I guess you start the next record and that was sort of my journey as well. “Pinto” was done, in the can and ready to go so it’s not finished but I have a lot of songs that are definitely going to be on the next record and yeah, I think it may be a good place to try out one or two new ones. For most people, probably all of the songs will be new, but I would love to play a couple and see what people think.”
​
Whilst the trip to the UK will be short, very busy and hopefully highly productive for Sykamore there was one thing that she was really keen to try to fit in whilst she is on this side of the pond.
“I never want to sound like so much of a tourist but I’m a huge fan of Pride and Prejudice, so I really want to go to Stourhead to see the Temple of Apollo, all of the gardens and everything. We are so busy that I don’t know how much sightseeing that I’ll get to do, we are playing The Cavern Club in Liverpool so will see the museum, but I would really love to see where they shot a lot of Pride and Prejudice. There were no promises but that was my one request to my manager.” 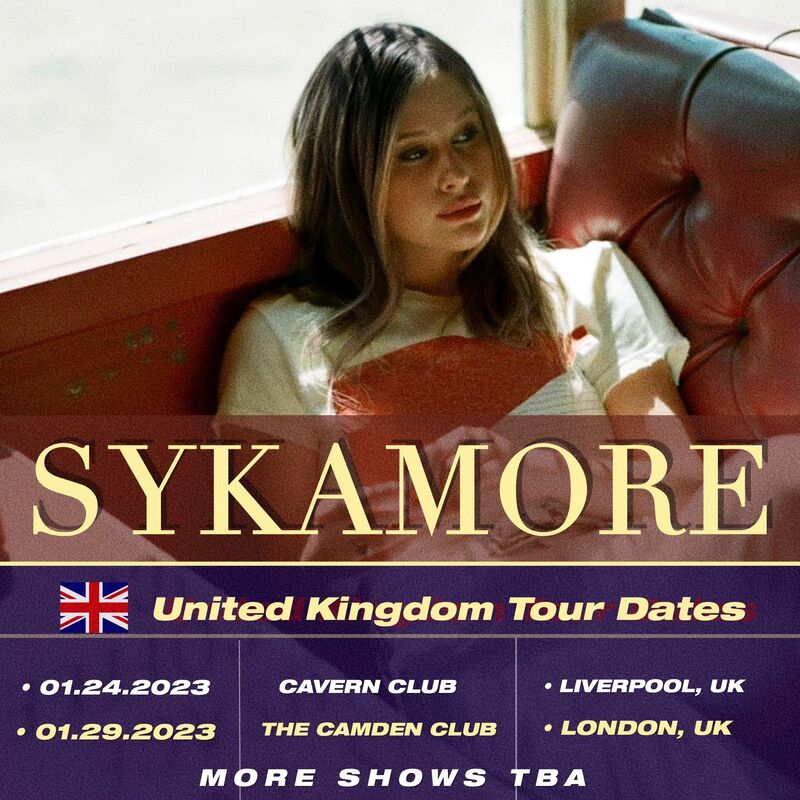 As a fellow coffee connoisseur and aficionado of a certain Seattle based chain that is also highly prominent over here, I felt it my duty to prepare her for the milk and syrup sweetness being slightly different compared to in North America. She was excited to experience England to follow up from her previous visits to Scotland and Ireland and whilst “Sykamore” isn’t typically what the Starbucks employees will write on her cup, I told her we needed to see at least once how this would come out and looked forward to seeing each other in person for the first time.
​
The debut studio album “Pinto” from Sykamore is out now and available to download/stream HERE. She will be in the UK later this month playing her first UK shows at The Cavern Club in Liverpool on Tuesday January 24th (TICKETS) and at The Camden Club in London on Sunday January 29th (TICKETS) whilst you can learn more about Sykamore on her WEBITE and keep up to date with her socially through TWITTER INSTAGRAM FACEBOOK.