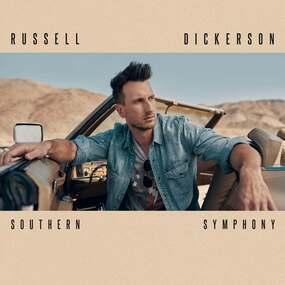 It’s hard to believe that Russell Dickerson has only released one studio album – 2017’s Yours – especially as the top 5 gold selling record spawned 3 country airplay number ones, including the double platinum title track. Just over 3 years later, Russell is back with a bang as the follow up – Southern Symphony – is set to be released this Friday (4th December 2020). Fans showed their demand for new music from Russel earlier this year when the first release, Love You Like I Used To, gave Russell his fourth consecutive Country Airplay number one (only him and Luke Combs have achieved this) and his first Top 40 on Billboards Hot 100. It’s been a long ten months for everyone but now we can close out 2020 in style

"'Southern Symphony' is hands down the best work I've created," said Dickerson, "It’s the best songs I’ve written. It’s sonically the best we’ve created. This album is ten honest and true tracks that tell the story of how I’ve grown as an artist and a man. I could not be more proud of every song on this album. Enjoy!”

​
Eric Paslay once told us everyone loves a whoa, oh in a song and Russell Dickerson is pulling it out on track number one, Never Get Old, of Southern Symphony in this feel good anthem that is going to go down an absolute storm live. It can be summed up with one of my favourite lyrics on the album, and a reference to a song that truly will never get old - that’s why anytime fishing in the dark comes on everybody sing along
Released to fans back in June, Home Sweet is catchy song number 2 on the album and we’re only at track 2! The track tells the tale of Russell knowing that no matter where he is in the world or how much money is in his pocket, his heart is always at home with his family and his newborn son Remington.

The tempo continues for All Yours, All Night as it tells the familiar story of wanting the night to last forever and you don’t might what you do as long as you’re together – all day you’ve been on my mind, now I’m all yours, all night.

​The standard contemporary country track Love You Like I Used To proved to be a hit with fans at the start of the year as Russell kicks off where he left off in 2017.
​Forever For A Little While looks at how it may not have lasted long but it seemed like it and you would give anything to go back to that moment  - nothing felt better, it felt like forever for a little while – a track that fits very well in the album with the added impact from the band. 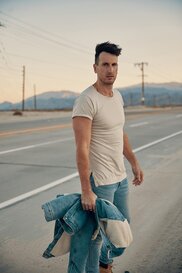 ​Russell proves that not every Russell Dickerson song sounds the same with Honey and this one will make you react to just that in the opening seconds but picks up into a country rock show love tale that is again built for a live performance – give me that good good, that sweet sweet slow lovin, like ohh honey

The title track, Southern Symphony, offers the listener a look at the lifestyle of the southern states in this hometown ballad that even sneaks in a reference to Garth - it aint much, but it sounds so sweet, a southern symphony.

Come To Jesus offers the relationship tale where one’s got the devil on their shoulder and one’s the voice of reason yet the mix works a charm.

Closing out the album, Waiting For You My Whole Life, is one of those tracks where the title pretty much sums up the idea behind the track which is sung with real power and passion and could be one of those with a simple lyric from the backing vocalists that Russel will enjoy hearing being sung back to him by a crowd – I’ve been waiting.

For fans of Yours, this release will definitely be worth the wait. It has the mix of tracks you’ll want to have on repeat, those that you’ll sing to the steering wheel and those that will offer real production value in a live performance.

The 10-track record is set for release on December 4, 2020, via Triple Tigers Records and is available for pre-order/pre-save here.