Steve Earle and The Dukes
Live at The Barbican Centre 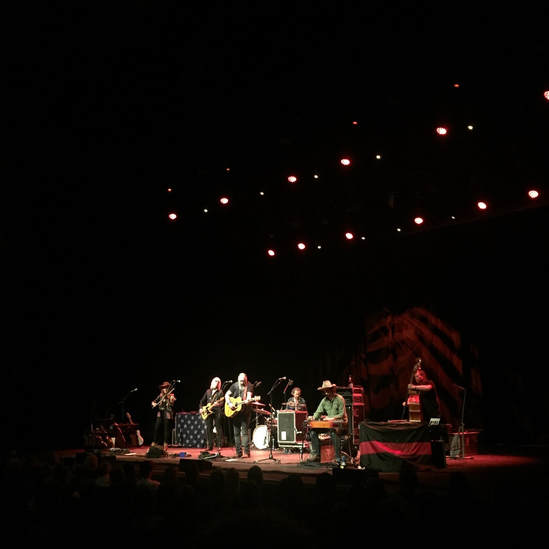 Steve Earle is one of few musicians who are known to not hold back when it comes to their political views and on this very night he couldn’t care less about what people might call or say of him.

LON- Steve Earle and The Dukes made a comeback to London this week, performing at The Barbican Centre. To open up the night ‘The Mastersons’ took the stage first after being introduced by Earle’s himself.  The duo started off the night with songs from their recent release ‘Transient Lullaby’ before later revisiting past work. The husband and wife Americana duo pose as a folktale storytelling their encounters in life and transient lullaby’s, from people asking them to ‘Smile’ to ‘Birds Flying South’. They share their witt on stage and stories behind songs, with their 30 minute soon coming to a quick end.

Soon after, Steve Earle took centre stage alongside his band The Dukes (Chris Masterson, Eleanor Whitmore, Kelly Looney, Brad Pemberton and Ricky Ray Jackson). Debuting his recent album ‘So You Wanna Be an Outlaw’ by opening up with the self titled single ‘So You Wanna Be an Outlaw’ followed by ‘Lookin For A Women’.  It goes without saying, Earle’s recent release was different than previous albums where the Texas Troubadour took a rather traditional country approach to produce a honky tonk record. However, this did not stop him from sharing his political views after ‘Firebreak Line’ - the singer/songwriter made his opinion clear towards the ongoing California fires.  The setlist went on to bring a collective of Earle’s past and current work including the likes of Galloway Girl, Guitar Town and Copperhead Road not to mention a revisit to his 1999 bluegrass album ‘The Mountain’ with the Del McCoury band. The night consisted of acoustic ballads, rocking blues with a hint of southern flare. Despite the seating arrangement the venue held, it did not stop anyone from dancing and singing along with the band to some of Earle’s classic hits.

Before leading the night to an end, Earle finished his set with a vivacious cover of Jimi Hendrix ‘Hey Joe’ prior to ‘Fixin To Die’. After a standing ovation, Earle and his Dukes took off from stage only to return for the encore. Keeping up with the tradition, only Earle’s encore is different after a set of two songs with his band, the singer/songwriter was left alone in centre of stage while the light dimmed, strumming to ‘The Girl On a Mountain’ he took a while to speak and while he did he told his fans about his upcoming plans, opinion on the US political system and “that orange balloon” sharing with his audience, ‘I don’t support borders or hate, I support love’ before the rest of the band returned on stage Earle went on to surprise his fans about his upcoming plans for future albums where one he vowed for a comeback with a new political album “I don’t care what people call me” he said while changing the subject to next album plan in his own words he shared  ‘I’ll be going back to Nashville to record a Guy Clark album.” as the band made their way up the stage, the song soon started and ended yet again with thunderous claps and a standing ovation while the band bowed to the audience.