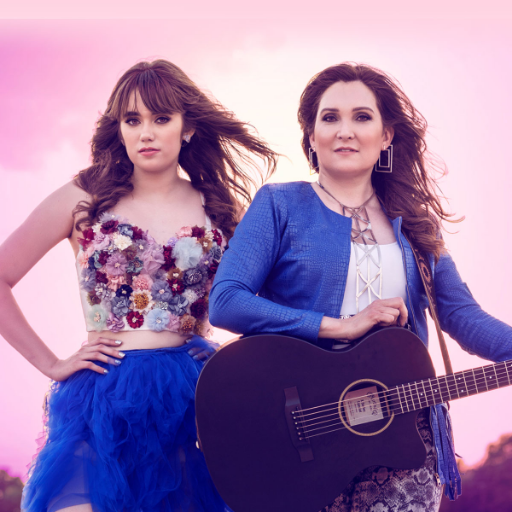 The O2 Arena is becoming a familiar place for country artists thanks to the Country2Country Festival, it's no so familiar with country music and screaming Primary School girls and their parents. That is the situation that Nebraska natives, The Belles, have found themselves in as they come to the end of an almost 90 date North America and UK tour with Nickelodeon singing star JoJo Siwa. The packed arena was full of screams as The Belles took to the stage last night (3rd November), and wasted no time in getting the crowd singing along with a cover of Taylor Swift's Shake It Off. During their short set, they were able to introduce the crowd to some of their own songs too in front of a sea of flashing JoJo Siwa branded torches. It certainly isn't the way any other Nashville based artist has introduced themselves to the UK but that didn't stop The Belles from soaking up every moment on stage with wide smiles across their faces. As they left the stage, they had done the job that could be asked of a support act with such a young target audience and certainly got the crowd ready for the main event.

​
Before the show, we were lucky enough to head into the arena early and have a chat with the Omaha duo.

Welcome to London. Have you been able to see much of England while on this whirlwind UK tour?
K. We we didn’t see a ton of Glasgow, managed a little bit of Manchester and then had a day off in Birmingham so we saw lots of that.
J. Today we really made an effort
K. Yeah, I’ve never been overseas.this tour started in May and it was my first time seeing New York City, first time seeing the ocean and my first time going out of the country was to go to Canada! It’s been a wild ride and I’ve seen way more than I could have dreamt of.

You have been supporting JoJo Siwa across North America and you saw the international dates added, how quick were you to volunteer to come along?
J. Very quick!
K. We were like yeeeeaaaaahhhhh as soon as they asked us back in July. We were actually in Milwaukee. Our family is actually childhood friends with JoJos as her mum was my dance teacher so we’ve known each other for years. We are all from Nebraska and they invited us along to audition for the tour and we couldn’t say no. It was so awesome they considered us, we were told to come to LA and just try out for them. They ended up picking us and it’s just been so amazing. I still can’t believe we are here and that we are just about to play the O2. If you told me a year ago this is where I’d never believe you. It’s crazy. It’s just a bunch of really good people who are all supporting each other.

Have you had to change anything about your set due to JoJo's target audience?
J. Kellie moved to Nashville about a year ago and has been writing songs there while I commute from Omaha still. Before this, we based our touring out of the Midwest and would play a lot of fairs, festival, country bars and would play up to three hour bar sets, which would include a lot of covers. When we auditioned for this we definitely had to make it kid friendly as we love to cover Miranda Lambert and The Dixie Chicks, although they do love a Taylor Swift song so we open with Shake It Off! AEG and Nickelodeon were at the audition with JoJo and once we got it, Kellie went straight into some writing sessions with just this tour in mind. We also knew we wanted to release an EP and wanted to aim it at that audience.
K. I was super inspired as I’m very familiar with JoJos programmes and could picture these audiences of young girls and knew what I wanted to say to them. I actually ended up writing three of the songs off the EP in just 36 hours! They just came super quickly and we play two of them on stage every night - A Mother’s Daughter and Beautiful Girl. We didn’t have to change too much about ourselves as we’ve always been kid friendly. If I was a little girl and this was my first concert, what would I want to hear, especially from an opening act? That’s what we wrote towards. The messages we’ve had from people after the show makes my whole life. It’s so much about girl power, be yourself, be confident, be strong and we’re just so proud to be apart of it.

How do you think the audience has taken to you, especially here in the UK?
K. It’s been Very similar to the US. The US crowds have been insane and coming over here, everyone’s been great. It’s funny though at the end of our set, the do the chant of JoJo and their accents are so different, which always catches me out! When you’re in an arena, to me it doesn’t feel any different to being in an arena in the US. At certain points in the day, I’m always like - oh yeah! - I’m in the UK. I love those moments.

How did you find time to record the new EP?
J. We got to work with Dave Brainard, (Brandy Clark, Jerrod Neimann) who has been nominated for a couple of Grammys, and he is just an incredible producer and musician. Once we chose the songs, we met with him and he is a great guitar player so we pretty much mapped out the arrangements on guitar and then we did a tracking day where we did the vocals with the guitar. We were coming in for one day between the tour, doing vocals all day and then leaving the next morning to go back on tour. He did so much work himself, plus he’s such an incredible producer that we just trusted him so much to make a super collaborative team effort. We really wanted to get the EP out there as we felt like we had a lot to say. We charted on the iTunes Country chart when it came out, which we were super excited about.
K. Our Beautiful Girl music video kind of exploded on YouTube and got 200,000 views in the first two weeks. That’s been so cool and we work with some of my best friends from high school on it so we had a clear vision of what we wanted it to be about. I don’t think we could have made this EP with anyone except Dave, he’s from Nebraska and we just trusted him. He would say what he would hear, play on the guitar but we couldn’t be around for all the tracking of every instrument. We would go in and he would send us snippets. It just worked. He really got it and some of those days we were so tired but we did it.
J. With Kellie moving to Nashville after we’d been making a lot of trips there while she was in high school as we would perform in the summer. We had a team of people around us who were able to help us get it off the ground. Kellie worked closely with several song writers and Dave, there was a lot of people pitching in to help.

Have you now got the itch to tour more of the world?
K. We love it! Yes, we had three weeks off between the end of the 82 date American leg and coming here yet I was so ready to get back on the road.
J. She was writing though as we’re already looking forward to what we are going to put out next year.
K. I’m going to spend the rest of this year and a couple months of next year striving to write for another EP and getting that out.
J. We have a secret about next year but we can’t reveal it yet so watch this space.

Can we expect you back in England soon on more of a country music tour?
K. Yes. I would love to play C2C, that would be awesome as I’ve always wanted to play that.
J. What I really like is every night when the lights go down and there’s this hush from the crowd while we are stood backstage ready to run on. Every night I appreciate that so much. We have played so long in bars and fairs in situations to pay our dues and now to be on a big stage like this we never take it for granted.
K. Super happy to be here, literally living the dream! It’s funny as this called the dream tour. I say it all the time! We got to play the arena in our home town, all of this is a dream come true
J. Bridgestone in Nashville was a real high point
K. Just to get to do this with people you’ve known since you were a kid is so unlikely and so crazy. It’s been the most rewarding thing ever. We are so thankful for this opportunity and believing us. We’re having so much fun. Coming over here has been a highlight of my life. I’m a Midwest kid, I’m like there’s Big Ben even though it’s all covered up - it’s still cool
J. We love how everyone speaks, yesterday we made a cover of Miranda Lambert’s It All Comes Out In The Wash and Kellie is introducing it in a British accent

So how do you say Birmingham?
K. Birmingham
J. There you go!!
K. BirmingHAM, Alabama.
J. There’s tons of local crew on our bus which is great.
K. There’s 11 British guys, on the first night I was sat there like oh my god, all these accents are incredible
J. Kellie said to me “I feel like I’m in Harry Potter!”
K. I was just in shock, I’ll be really sad when we have to go home, it’s now less than a week. I’m in love with this whole thing and could just tour forever. I love writing though and will be glad to back in my apartment.

It sounds like it’s been an incredible experience and we hope to see you at C2C soon.
J. Thank you
K. Thank you, it’s just a joyous night every night.
J. With our next project we are definitely growing up more into country and would love to come back. For now it’s all about seeing the smiles on these young girls faces and for me I’m growing my own little fan base with the mums which I love and appreciate.