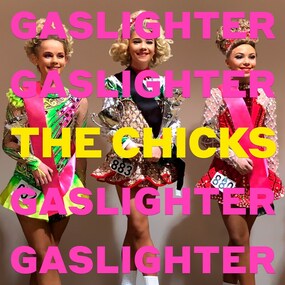 Country music supergroup The Chicks have released their first record in 14 years Gaslighter, July 17th. Produced by Jack Antonoff, the 12 track celebrates and empowers all women, while opening up about heartbreak, divorce and getting back up again.

Kicking off with the title track and single “Gaslighter” a vigorous, unapologetic, catchy sing-along tune. “Sleep At Night” opens with dancing banjo playing and a haunting pedal steel by Maines father Lloyd Maines, the personal tune about the band's lead singer Natalie Maines's divorce. Thus, the stories continue throughout the album with “Everybody Loves You”  and “My Best Friend's Wedding” reminiscing her relationship, where it got and now retrospecting life,  without him is saner than being with him. “Tights on My Boat” the kiss of death cheating song according to Maines, there weren’t any leggings instead it was a metaphor for another clothing gear “I hate to disappoint, but that’s not true. That’s just fun, I didn’t say there wasn’t a boat involved,” she explained, “I’m saying there weren’t tights.” on the Howard Stern show.
Meanwhile, “Hope it’s Something Good”   is a message to her estranged ex-husband of 17 years, she recalls “After so long I learned to hold my tongue, and now that you’re done I get to write this song.” despite all the hardship “Set Me Free” the sombre tune finds Mains pleading yet believing, there is a brighter side to things.

On the principle of heartbreak, “Juliana Calm Down” is filled with hopeful and encouraging messages. The near 5-minute track addresses women that included Marie Maguire daughters Eva, Katie, and Harper and sister Emily Robinson Juliana and Violet. Meanwhile, likely linked to the band friends and/or relatives Juno, Yaya, Berta, Hesper, Amelia, and Naomi are likely.

However, heartbreak and divorce was not the only topic on trios album, “Young Man” a stripped-back song paving way for Maines' incredible vocals to a rather personal, deep letter to her children.  Advocating female power “For Her” begins with a soul like vibe with Wurlitzer, as Maines enters, empowering young girls and woman to be unafraid of who they are and want to be. Meanwhile, The Chicks continue to use their voice to fight for justice with “March March” a political song voicing school shooting, fake news and the current ongoing and recurring political problems for years in the US accompanied with Martie Maguire evocative violin.
Now back from hiatus, the 13-time GRAMMY award-winning, multi-platinum selling global band, The Chicks once again proved they’re not to be messed around with.