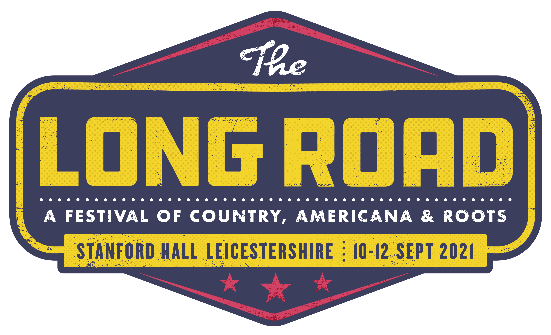 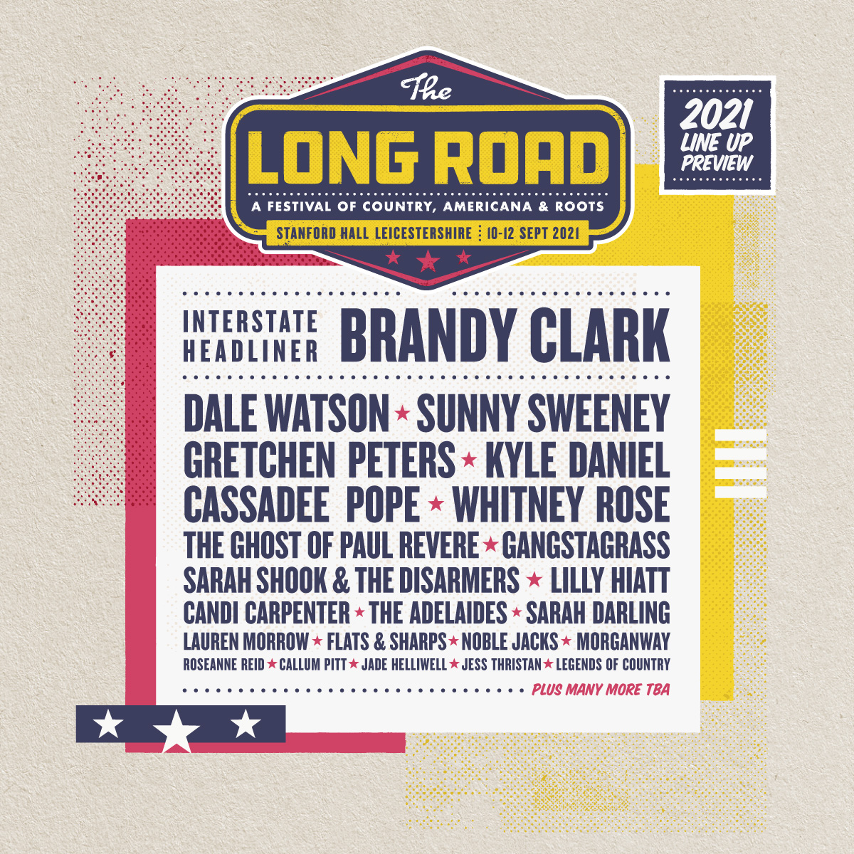 As the response to COVID-19 has progressed in recent weeks, our team at The Long Road have been working hard to assess what the impact on this year’s festival may be. While the festival is a number of months away, given the current climate, it is with regret that we announce that The Long Road won’t be possible this year. Creating an event in September that both stays true to the values that you our community deserve, and most importantly keeps you, the artists and our wider country family safe will not be possible. Alongside a priority to protect the capacity of the NHS and emergency services in Leicestershire, a need that will be present for some time to come, we also have to acknowledge the difficulties in bringing together a line-up which features so many of our friends from across the pond during a climate of restricted travel and distancing measures.  The 3rd edition of The Long Road will now take place 10th - 12th September 2021. Planning is already well underway and we’re working to move as many of the scheduled acts over to next year as possible. Ahead of a full announcement later this year, we wanted to give you a flavour of the variety and talent that we have to look forward to, so we’re announcing a preview of 2021 artists shortly. Any existing tickets will automatically be transferred to the 2021 event, but should you not be able to attend these new dates we will of course refund your tickets. All ticket holders will shortly receive an email from their ticket provider with further details on this process. During this time of change our community will continue to grow and to support one another, we are so proud to be a part of that with all of you. Be safe and take care of each other and we’ll see you a little further down the road in 2021.
TLR x

Ahead of a full announcement later this year, The Long Road has announced a preview of artists that will join the 2021 line up.
As well as Brandy Clark, Dale Watson, Sunny Sweeney, Gretchen Peters, Cassadee Pope and Kyle Daniel, an eclectic mix of acts from across the Country spectrum will appear including Whitney Rose, The Ghost of Paul Revere, Sarah Shook & the Disarmers, Lilly Hiatt, Candi Carpenter, Gangstagrass, The Adelaides, Sarah Darling, Lauren Morrow, Flats & Sharps, Noble Jacks, Morganway, Roseanne Reid, Callum Pitt, Jade Helliwell, Jess Thristan and Legends of Country.

Creative Director of The Long Road, Baylen Leonard says “We just wanted to say thank you for your support and your patience and your understanding while we figured out what was going on this year. The entire team work on The Long Road year-round but the moment that it really comes to life is when all of you join us in Leicestershire so we’re really sad that we’re not going to be able to do that this year. We’re so proud of this initial 2021 line up, and we hope that it will provide you all with a little something to look forward to. A huge thank you to all artists, agents and managers who have moved mountains to make The Long Road part of their 2021 calendar. We so look forward to joining together with all of you a little further down the road in 2021. Stay safe.”
The Long Road presents one of the UK’s largest, most authentic celebrations of country, Americana and roots music featuring five stages of live performances and a wide range of additional offerings including songwriters’ rounds, a classic American motorshow, traditional Southern-style food stalls and dedicated kids’ area.

Early Bird tickets for 2021 are on sale now.

View Baylen’s video message and all info on The Long Road’s website now. 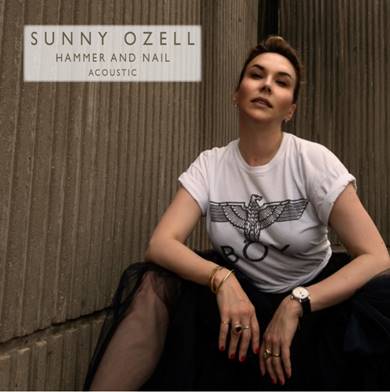 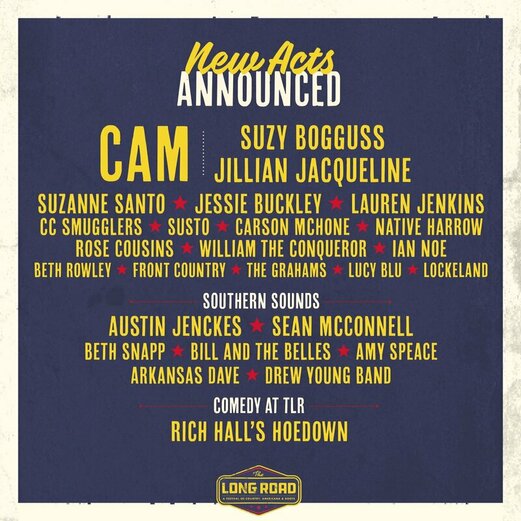 BAFTA Rising Star nominee Jessie Buckley, who has wowed audiences playing a country singer in the new movie Wild Rose, Grammy-nominated Californian country-pop singer Cam, Nashville-based singer-songwriter Jillian Jacqueline, lead singer of honeyhoney Suzanne Santo and Grammy-winning US country singer Suzy Bogguss are amongst the names added to the line-up for The Long Road festival, which returns to the grounds of Stanford Hall stately home from September 6th – 8th.  The newly announced acts join the likes of Kip Moore, Josh Turner, Asleep At The Wheel, John Paul White, Eric Paslay, Charley Crockett and many more on the bill for the 3-day event, which is widely regarded as the UK’s most authentic greenfield country, Americana and roots festival.

Also joining the line-up is American comedian, writer and musician Rich Hall, who brings his acclaimed Hoedown show to The Long Road (“Immaculate wordplay imbued with a genuine passion for the songwriter’s craft” The Times). The performance will mark the festival’s first foray into comedy and will see Hall celebrating all things country and Americana with his riotous bluegrass backing band.

“I’m so excited to be invited to The Long Road festival and to get on the road with my Wild Roses! I’m a massive fan of the festival and the artists that are lined up to perform this year, and I’m sure it’s going to be a really special occasion.”

This year sees the launch of the festival’s premium campsite experience. The Hoss Town campsite area will feature airstreams and tipis, a 24-hour concierge, posh showers and toilets, phone charging spots and a pamper tent with festival essentials.

“With this latest addition of exciting artists to an already stellar lineup, you can experience the true width and breadth of Country, Americana, and roots all in one place. There truly is something for everyone. I can’t wait to welcome them and you to celebrate the music and the lifestyle at The Long Road.”
​ 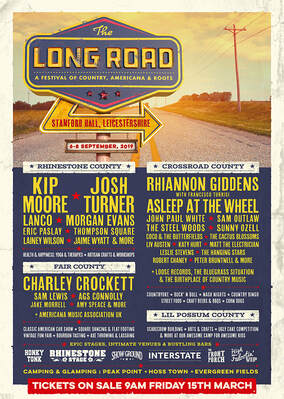 ​Following the success of the first edition of The Long Road festival, which saw performances by over 70 artists from across the country, roots and Americana spectrum, the immersive 3-day music and lifestyle event will return to Stanford Hall in Leicestershire this summer.

Running from Friday 6th to Sunday 8th September, the festival has announced the first wave of acts confirmed to perform at this year’s event including its two headliners, superstar country singers Kip Moore and Josh Turner. Since the release of his breakthrough hit "Somethin' 'Bout a Truck", now widely regarded as one of the all-time classic country songs, Kip Moore has positioned himself at the forefront of the genre, releasing a string of best-selling albums. Josh Turner, who makes his first ever UK appearance, is one of country music’s most in-demand artists having sold over 12 million albums across the course of an illustrious career. Moore and Turner will headline the Rhinestone Stage on Saturday 7th and Sunday 8th respectively.

The Long Road will take place at Stanford Hall in Leicestershire from September 6th – 8th 2019. Tickets are on sale from 9am this Friday March 15th. Day tickets start at £40*, Weekend No Camping tickets at £90* and Weekend Camping tickets start at £110* (*for one adult ticket plus booking fees). Ticket prices correct at time of announcement. Tickets are available from www.thelongroad.com. 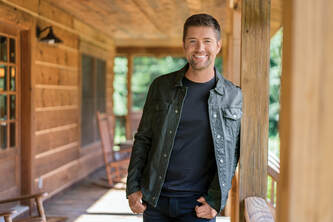 “Playing The Long Road Festival has been a long time coming as my fans in the UK have been practically begging me to cross the big pond for years! I’m excited to finally be able to go over and play for my loyal, and patient, fans!”

The festival will also revisit its partnerships with The Birthplace of Country Music, which showcases the role that Bristol, Tennessee and Bristol, Virginia played in the birth and development of country music, The Bluegrass Situation (BGS), an online music magazine and curator promoting the continued growth of bluegrass, roots, progressive folk rock, Americana music and culture, The Americana Music Association UK, and independent UK labelLoose Records. These organisations will bring artists to the festival to showcase the broad array of talent on offer across the global country, Americana and roots music scene.

“I couldn’t be more excited to share what we have in store for year two of The Long Road. After such a warm embrace by Country and Americana fans in year one, we got straight to work on the line-up and experience for this year and it promises to be even better. Top notch artists, hands on experiences, and great food, all in a world created just for music fans really is something special. I can’t wait for the gates to open.” 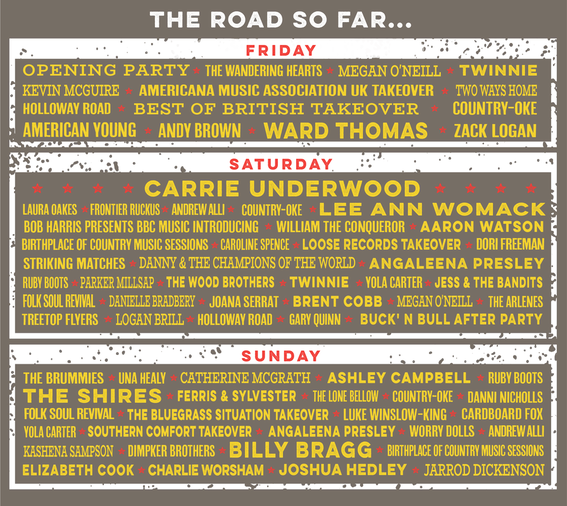 ​As the work week ended, it was time to pack up car with the limited camping supplies I could pinch off friends (a tent, the world thinnest camping mat and a sleeping bag!) and head north for the inaugural Long Road Festival. After a crawl around the joyful M25 on a Friday evening, with fingers crossed I would arrive before the box office closed at 10pm, I exited the motorway and began to question myself – is there really a music festival going on here? Maybe it was late at night and I just didn’t notice, but there was not a single sign until you arrived at Stafford Hall which gave you parking directions. Thankfully the Sat Nav had done its job.

Having spent the better part of two and a half hours in the car, I opted to explore rather than put the tent up straight away – it was dark so wouldn’t make much difference anyway! I had arrived with just moments to spare before Ward Thomas took the Interstate Stage to headline the opening night. Even though it was the opening night, of what for many was set to be a long weekend, the tent was packed with fans singing along to a mixture of both old and new tracks. Towards the end of the set, I went on a mini adventure around the festival grounds. At this point, I was discover that The Interstate stage was not the only area that was packed to the rafters. Another UK artist, Twinnie, was performing to a packed house at an intimate inside venue – The Honky Tonk. While the set up of The Interstate Stage looked like any other this stage had surely been the work of many hours of brainstorming and setting up. With the makeshift walls covered from top to bottom with pictures and dive bar neon signs, the bar was on one side with the corner stage offering plenty of space on the other. If the inside caught your attention, the attention to detail on the outside was second to none – if you could ignore the cows in the neighbouring field and the midlands evening breeze you could be on a corner on Broadway, minus the bro country bars! The organisers of The Long Road hadn’t stopped there though. The Front Porch stage, which had been used to celebrate AMA UK on the opening night, looked exactly like you would imagine. At first I assumed they just used it as a random stage name – but it was in fact set up like a front porch (rocking chair and all).
Having had a wonder round it was time to attempt pitching a tent. As I approach 33 years of age, this was to be my first attempt at camping! Never one to say no to a challenge, I would need to pitch it in the dark. There seemed to be plenty of festival veterans around the camp site with some covering their tents in fairy lights, having solar panel lights at the front and the stove and even a gas BBQ at the ready! With the tent up it was time to get some rest (or attempt to anyway) before the full day on the Saturday. By about 5am though I was very jealous of the people in caravans! It was rather cold and damp!! 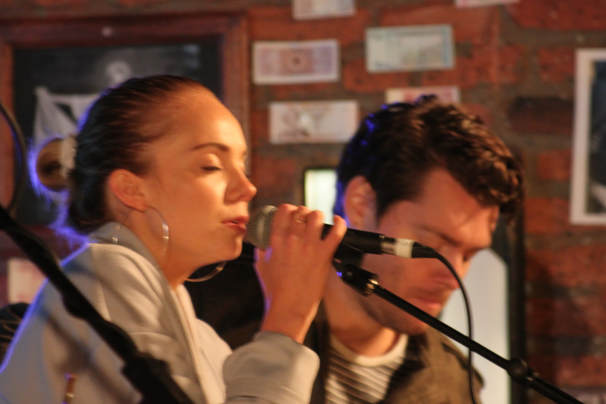