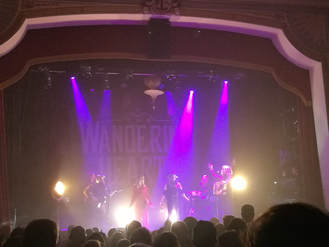 The Wandering Hearts our one of the true success stories of country music in the UK. Go back in time to March 2017, a time when country music concerts were a rarity and you had to repeat yourself when you said you like country music. The Brothers Osborne have played the main stage at Country to Country and opt to perform an intimate gig for fans at Dingwall, a 500 capacity venue in Camden. As the fans came into the venue they were created by an unknown British quartet who just about managed to fit on the minimalist stage. Only a handful in the audience may have known who they were that night, even fewer either knew words to or recognised any of the tracks they played that night. No one on that March evening could have predicted the next year and a half, not even the band themselves - except maybe in their dreams.

It is November 2018, country music concert are now taking place at venues across the capital every week, tickets sell out within minutes of going on sale. That unknown British quartet from 30 months ago have now released their highly praised debut album, are about to release a deluxe version of it and are on a UK tour. Tonight their tour has brought them back to London and Dingwalls is a distant memory, tonight The Wandering Hearts have sold out Islington Assembly Hall. Yes that is right, the 800 capacity venue has been sold out for a British country music act. As if that isn't enough, they have two support acts to open the night for them. One of which is an American, straight out of Nashville. Yes, Americans are now coming to the UK to be the opening act for a British band.
​

The night was open by Fiona Bevans before the said American, Rusten Kelly, took to the stage. Having recently released his debut album, Dying Star, it is still likely that many would not recognise the name. Some may have noted he was the partner of C2C headliner Kacey Musgrave's and expected a similar country sound - they would be wrong. This is one family that perform at two distinctive ends of the country music spectrum. His true to life lyrics about drinking and drug abuse, tracks with the title asshole - based on him getting arrested - and face plant - you can probably guess - are a far cry from pop country. Very much a man of the people, Kelly doesn't take to people talking through his sets. It took him till the end of his first track to make a point of it, one that many agree with. Unfortunately, the talking didn't stop causing Kelly to even stop mid-song to have a word. By far the quote if the night - “I don't care what you did today!! I just want to do my job and you can be a consumer instead of an arsehole.” With his mix of guitar and harmonica, Kelly certainly will have made a name for himself on this tour and more than likely be able to notice a greater following in the UK.

As 9:15pm struck, the venues was filled with concert goers, ready to see the main act. As the four piece took the stage, the first thing you noticed from 18 moths ago was tall 800 people knew the words. Kicking things off with Biting Through The Wire and Wish I Could, set the band for an evening where they would entertain the crowd with all 12 of the tracks from their debut Wild Silence album. When you would think they might have wanted to take a break after their recent successes, the band has kept busy and also gave fans a sneak peak of what to expect on the upcoming deluxe version of the album with Run and Till The Day I Day. As the night went on, the crowd participation didn't wander, with many singing and boot stomping all night. For their encore, they would take on The Wonder of You, before closing the night to cheers with Laid in the Ground and Devil.

This performance proved why The Wandering Hearts have made such an impression recently on the country music scene in the UK and, without doubt, almost looked like a different band from the one that performed in front of 500 people at Dingwalls in March 2017.