The Sit Down with A Tale of Two

Stephanie Adlington has a special connection with the UK, having lived in London for 5 years whilst studying at The Royal Academy of Music. Well-known in Nashville and beyond as a premier vocalist (“The Siren of the South”), Adlington has won 2 NIMA (Nashville Industry Music Awards) and a Beacon Of Light Award. Originally from Massachusetts, guitarist and songwriter Aaron Lessard is a graduate of the Berklee College of Music in Boston. Since he started playing guitar at the age of 9, he has always had a genreless approach to music, loving all styles from Rock, Jazz, to Roots Americana. Lessard was a finalist in the Ernie Ball “Crossroads” Worldwide Contest.
​
Combining the best of Americana, Country and Blues melodies with timeless Southern Gothic storytelling, A Tale Of Two is a rising duo in today’s Roots Music scene. Meeting in local Nashville venues, Adlington and Lessard began performing and writing together, recognising their artistic chemistry.
The six-song A Tale Of Two takes the listener through different stories and characters, all eminently relatable. The E.P. was fully recorded live, with virtuoso musicians Adlington and Lessard channelling southern lullabies, front porch blues, and even hints of Jazz and French love songs. The result is a captivating Americana collection of songs about timeless themes of loyalty, love, heartbreak and the struggle of the human condition. Ahead of the release of their debut release, we caught up with Stephanie and Aaron over Zoom to learn more about the duo and this new project.
​
So first of all, how did the two of you come together and decide that it was a good fit for you to come together as a duo?
“I moved to town in 2017, Steph was and still is a prominent local Jazz artist. Her own style of music she calls Jazzicana which is a cool little crossover genre concept.” (A)
“It’s Jazzy kind of folklore, which is what I’ve always liked to do.” (S)
“Eventually we started working together just on the local scene.” (A)
“I needed a guitar player and he played guitar so that was convenient.” (S)
“We played a showcase out in Memphis where we played our original music together and people liked the chemistry, we had a lot of fun and eventually we wanted to start writing. I was doing a rockabilly project at the time that was kind of getting exhausted so I wanted to take what Steph had created and add a dynamic and upbeat energy to some of it, offer a different twist to it and that’s kind of why it does have influence from Steph’s project with a similarity but it definitely has our own blended influence to it.” (A)
“We both love so much music, we’re both influenced in so many different ways. I personally like that about an album, Van Morrison is one of my favourite artists to listen to format wise because every song is always different, you never know it’s going to go. I tend to get very bored if an album sounds the same, if you haven’t taken me somewhere else, I kind of zone out. I hope that people gravitate towards our project because we do have a lot of diversity in there but I hope the core format comes across as a rootsy and bluesy storytelling aspect.” (S) 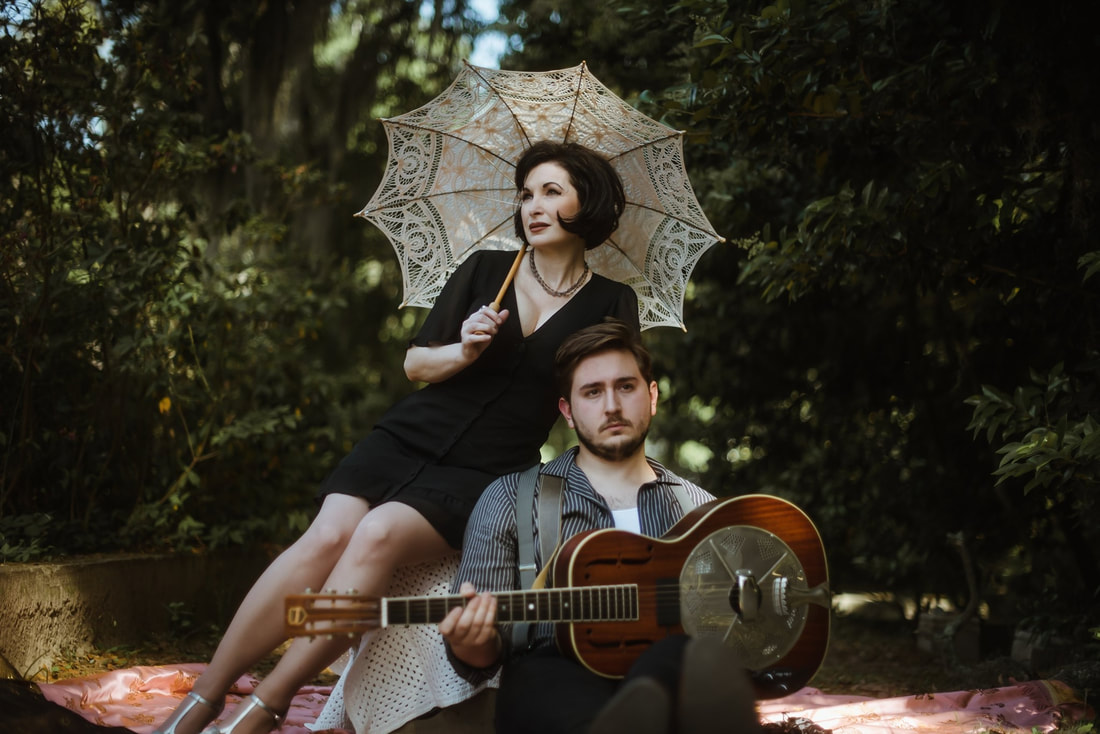 The two of you studied at colleges with a renowned music school and your sound explores a lot of these different sounds and elements that you touched up through a variety of influences so how important is the creative freedom to embrace that in your sound?
“It’s funny how we don’t love to do the same thing over and over again. It’s lets write this kind of song or this kind of song. The other thing to that I have really loved the process of since we are both educated musicians academically, it’s been nice to break that down again because for me it’s at a point in my life and in my experiences, it was hard to get out of that whole academic mindset and understand that at the end of the day, none of that really matters. It’s having so much emphasis on the lyrical aspect of songs, the message and things like that is really the forefront and that’s the important thing.” (A)
“I think there’s a curse and a blessing to that. The blessing is that you get to be creative and hopefully create something new that people gravitate towards, then the curse is finding the audience that appreciates that because it’s not the big huge mass of people and especially in Nashville.” (S)
How would you describe your sound and what the two of you do musically?
“First of all, I do think it is hard to explain to the Nashville bubble because I think it is so consolidated to this typical, country kind of formulaic structure that is focused towards that pop element. I think it’s always been like that, I heard people talking about that problem twenty-five years ago, I think the music was broader though. Regardless of that I would say we are folk roots. I think Americana is really starting to on this southern rock element, with Marcus King blowing up, Larkin Poe and those artists starting to get to that space definitely have hints of this classic, seventies rock element and I would say as of now, we don’t fall into that so I would put us more in the folk and roots space than Americana.” (A)
​
Given the state of the world over the past eighteen months, has this impacted significantly on the release and how the finished project has looked?
“We had everything set to where we thought it was going to go and we were actually planning on going in April 2020 but of course March 2020, the shit hit the fan so we didn’t end up going in until November? September, October or November, something like that.” (S)
“Blood Or Wine was written over the summer so if the pandemic didn’t hit, that wouldn’t have been on the record.” (A)
“I think the core was set, but it gave us an opportunity to continue to practise that, continue to think of that harmony and that arrangement. We talked about The Letter which was a little bit more Celtic busy in the beginning but settled back into where it is. In retrospect, the time was good but so frustrating at the same time because everything was set aside and hoping at that point that you can get to do it, but it worked and it’s all good.”
It must feel quite difficult launching a project with the difficulties surrounding touring and playing live during the pandemic?
“It’s frustrating because you want to!” (S)
“I will say that the positive that you can take away from that is making sure that everything that we present publicly and everything we need to maximise opportunities, we have been able to take our time and execute those things to make sure that when we are at this point now and going into next year where we are planning to tour heavily next year, it will just be more presentable and ready.” (A)

Has the additional time sitting on the EP before the release brought about any aspect of being overcritical or over analytical with what you had been working on?
“Absolutely! I hate to say and I guess this is with any artist and this has been my gripe about going to concerts, where you want to hear the hits and the songs you know but artists are ready to move onto something new and I’m kind of like that. The album officially is just being released but I’m like what are we going to write next? We’ve lived with it for song long and it’s been finished since December of 2020!” (S)

Lastly, while Stephanie has spent a lot of time over her in London, is it somewhere that Aaron has managed to visit and it on the cards collectively in the future?
“I have not but we will next year! I have been vowing that even if for some reason we cannot tour the UK next year, we are going regardless!” (A)
“I have got him obsessed with all the British TV shows that I make him watch all of the time and from all of my friends that we Zoom call.” (S) (From here I had to dig further and see what exactly she had got him hooked on)
“Well, I’m going to go throwback and I will confess I am a huge Ab Fab fan. I love Luther and Endeavour which is incredible.” (A)
“I’m a huge Midsomer Murders girl, I think I have seen them all. (We then joked about how she had too much time studying over here and really was a proper British student as the only people that watched Midsomer Murders were students and people in their eighties because it is the only thing on the TV at the time that it is on) Another show that I love and I can’t find it right now over here but I’m dying for him to see is Prime Suspect! Helen Mirren was kickass gritty; she can be glam in film and then can be detective woman!” (S)

​
A Tale Of Two EP Track Listing:
“The Letter”
“Blood Or Wine”
“Ain’t Nothin’ But A Fool”
“Waiting For Ever After”
“Chicago Lightning”
“Stay With Me”
The self-titled debut EP from A Tale Of Two is out now. You can find out more about the duo on their WEBSITE or keep up to date with Stephanie and Aaron socially on FACEBOOK INSTAGRAM YOUTUBE SPOTIFY 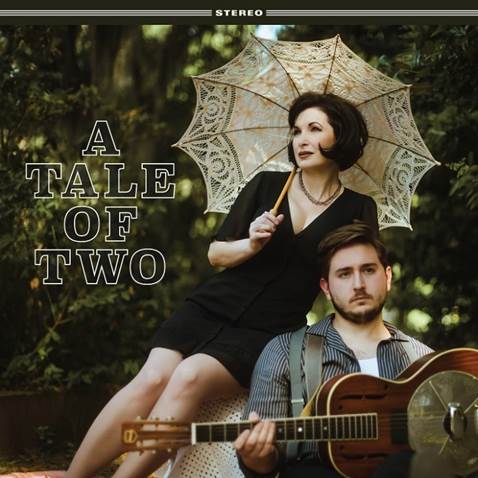