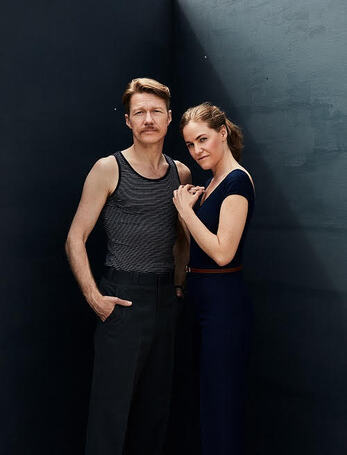 ​Cosmic folk. That’s the term Lucinda Williams coined for Darling West after sharing the stage with the Norwegian duo a few years back. An appropriate term for their forthcoming album We’ll Never Know Unless We Try, combined with new material which also leans into sunny West Coast landscapes.

On We’ll Never Know Unless We Try the band serve up top-down-wind-in-the-hair pop songs along with tear-jerker ballads. With all the time spent in the US in the last three years, it’s fitting that the one and only Aaron Lee Tasjan has co-written one of the songs.

Main band members Mari and Tor Egil say on the process: ”After two years of intense touring, and meeting tons of people, we are left with a feeling that there are many good forces at work in the world, even though the state of things can sometimes seem hopeless. Even though it wasn’t a planned theme in the songwriting process, we seem to have been inspired by this, and that hope and encouragement has become a common thread in our lyrical universe this time around.”

Darling West are always on the move. Since the release of their Spellemann-winning (Norwegian Grammy) album Vinyl and a Heartache (2016), they’ve been to the United States so often that you easily could call it their second homeland. Their Nordic twist on American songwriting traditions was further showcased with While I Was Asleep (2018). This time, parts of the new album were written in Nashville and on tour both in the US and Europe.

We’ll Never Know Unless We Try was recorded in Propeller Studios in Oslo, and produced by Kåre Chr. Vestrheim (Marit Larsen, Highasakite). The music regularly pays tribute to heroes such as Fleetwood Mac, Jackson Browne and The Byrds, while what has become the trademark Darling West sound seeps through everything - with acoustic beauty, gorgeous harmonies and melodies that won’t let go. 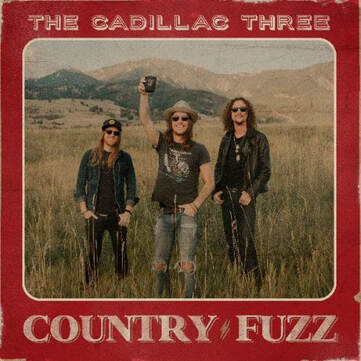 Proud of their roots and fuelled by the sonic melting pot of Music City, Nashville natives The Cadillac Three have unveiled the details for their fourth full-length record Country Fuzz, released via Big Machine Records on February 7th 2020. The news is accompanied by two brand new tracks - ‘Long After Last Call’ and ‘Back Home’ – both available to stream now.

Whilst performing a hometown show in downtown Nashville, the rowdy trio surprised their congregation of fans by spilling all the beans on the upcoming record and performed a few brand new cuts from it to celebrate. They also stormed through the recent singles ‘Crackin’ Cold Ones With The Boys’ and ‘All The Makin’s Of A Saturday Night’ – both of which are included on the album. Cheers, beers and hallelujah, indeed.

“We’ve spent the last two and a half years working on this album,” exclaims GRAMMY-nominated frontman Jaren Johnston, “but our sound even since high school has always been the epitome of Country Fuzz – Country, rock and just a little bit of funk.” Armed with a diverse arsenal of radio-ready country anthems, hard and heavy rock ballads and traditional southern folk, Country Fuzz is set to launch The Cadillac Three to even higher planes.

The band have also joined the stellar line up for the Country 2 Country tour, performing alongside Luke Combs, Darius Rucker, Eric Church and more throughout the UK and Europe in March 2020. The tour stops off in London, Dublin, Glasgow, Amsterdam and Berlin, with tickets going on sale November 1st. More information about C2C can be foundhere.

The 2019 CMA International Award nominees have cultivated a huge following as part of superstar tours and massive festivals the world over, serving as special guests in the US this year on tours with Travis Tritt, The Charlie Daniels Band and Luke Combs while also selling out headline stops across the UK and Europe.

Crack open a beer and raise your glasses – Country Fuzz is coming!

The performance will be their first on these shores in almost three years, their last UK show taking place at the beginning of December 2016. This will serve as a rare opportunity for British fans to see them perform in an intimate setting as a six-piece rock band, storming through their best loved songs and providing an exclusive preview of brand new material.

The band comment, “We are excited to announce that we are coming back to the U.K. We can’t wait to see you all and play some new songs off our upcoming album, Cheers!”

A Thousand Horses recently released their brand new single ‘Livin’ My Best Life’, the first track to be unveiled from the band’s forthcoming new album set for release next year. Produced by Grammy Award-winning producer Dave Cobb and recorded at Nashville’s historic RCA Studio A, the album is A Thousand Horses’ first project in partnership with Cobb’s Low Country Sound imprint at Elektra Records. Additional album details to be announced soon.

Of reuniting in the studio with Cobb, guitarist Zach Brown shares, “Dave’s been a long-time supporter of the band. He’s always really believed in us and gets our vision, and always has. I mean, we named our band in his studio 10 years ago. It’s amazing this journey we’ve had with him.” Adds fellow guitarist Bill Satcher, “Dave is a brother. It’s great to get in there and make records with your friends. He is like an additional member of the band in that situation.”

The release of ‘Livin’ My Best Life’ added to a series of breakout years for A Thousand Horses following their hugely acclaimed full-length debut Southernality in 2015 and their mini-album follow-up Bridges in 2017. Southernality’s lead single, ‘Smoke’, reached #1 on Billboard’s Country Airplay chart, which made them the first group to top the chart with a debut single since Zac Brown Band’s ‘Chicken Fried’ in 2008.

Of the band, Rolling Stone praised, “country music’s new Lynyrd Skynyrd…a muscular mix of radio country and Southern rock,” while CMT declared, “stellar…the quartet is learning from the best, making records they believe in, being true to themselves, their artistry and making it happen.” Most recently, the band released 2017’s deluxe EP, Bridges, of which Sounds Like Nashville hailed, “showcases what A Thousand Horses do best with a mixture of heavy Southern rock influences and nostalgic country storytelling that will have listeners begging for more.” 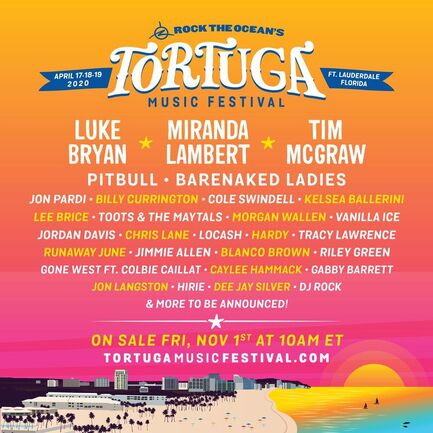 Tortuga Music Festival earned praise for its 2019 lineup being “more diverse than those of past years by several measures,” (Miami New Times) and will continue to offer a genre-fusion of Country, Rock, Reggae and Hip-Hop and more with 2020 acts including superstar rapper Pitbull, rock band Barenaked Ladies, reggae act Toots and the Maytals and rapper Vanilla Ice leading the charge. As Sun Sentinel heralds the “festival continues to evolve beyond a point of pride for locals into a travel destination,” fans from across the world will travel to the southeastern shoreline to enjoy a collection of celebrated artists on the Main Stage and Sunset Stage, as well as the most buzzed-about newcomers in the country genre sharing their voice on the Next From Nashville stage.

Each year Tortuga Music Festival raises funds and promotes awareness of the issues that the world’s oceans currently face, as well as supporting marine conservation and research. Festival guests can also learn more about where a portion of the proceeds from their passes go onsite at the festival at Rock The Ocean’s Conservation Village. Offering an arena of exhibits within the festival grounds, fans can experience games, interactive touch tanks, cooking exhibitions, the latest ocean technology, and learn how they can help make a difference. For more information, visit: TortugaMusicFestival.com/conservation/.