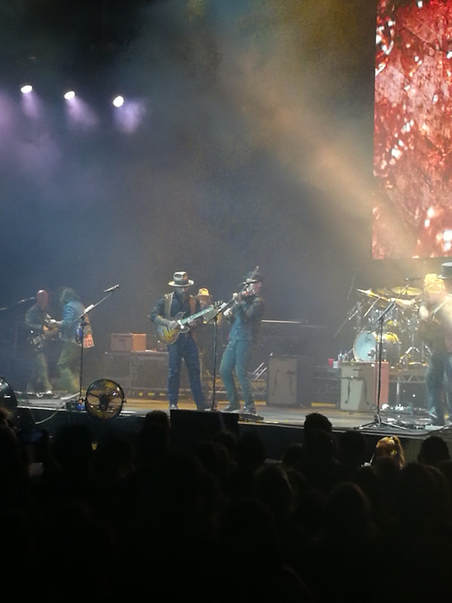 In London as part of the annual Blues Fest, Zac Brown Band left fans with a one night only show they won't forget in a hurry.

Despite a few technical difficulties before the start of the stage, the eight piece made up for lost time and barely have themselves a moment to breath during the 80 minute set. Despite the O2 arena only opening the lower bowl for the set, the crowd were on their feet for every single track, it did make you feel a little sorry for the people who placeed the rows of seats out on the floor section as they truly had the most pointless and time wasted job of the night - not one was in use.
​
The energy in the arena was electric. Zac and guys went through hit after hit. The eight piece band stepped onto the stage to Whiskey's Gone, before heading straight onto Knee Deep and As She's Walking Away. It didn't take long for one of Zac's notorious covers, the first one this time it was for Kings if Leon's, Use Somebody. As the crowd tried to catch a breath it was straight onto Keep Me In Mind before John Driskell Hopkins took over the lead for the second cover of the night - Metallica's Enter Sandman.


The hits just kept on coming, including the poignant My Old Man and a good sing-a-long to Toes, and the O2 crowd lapped up every second. Due to the technical difficulties prior to the set, a few tracks that had originally been planned were crossed of the set list, although there was still time for Clay Cook to take over the mic and a cover of The Allman Brothers classic The Whipping Post. As the clock began to edge closer to 10:55 the band ensured fan favourite tracks Toes and Homegrown were not missed off the set which was followed by one of the rare moments Zac conversed with the crowd (showing exactly how tight for time the band were with their set) to introduce the other seven members of the superstar band.

A quick check of the clock allowed for one more song. It came across as an impromptu track to squeeze into the final minutes of the set. However, the encore track was actually pre-planned on the set list. The decision to not end on Homegrown and allow Jimmy to put down the fiddle and blast out Sabotage by Beastie Boys, left the arena slightly stunned. While some quickly realised what track it was and begun to frantically jump around and live for the moment, others looked around with puzzled faces trying to work out what was going on - one of the biggest bands around are doing a Beastie Boys track at a Blues Festival  and this is the track they are leaving the stage to.

Despite the obscure ending to the set, the band did all they could to fit as many of their fan favourite hits into the limited time they had to leave their mark on the Blues Festival crowd. There is no doubt that many in the crowd (and those across the country who could not attend) will certainly be hoping they don't have to wait another year and half to see the band gracing the stage in London and hopefully across the country.